Editorial – Si vis pacem para bellum (If you want peace prepare for war) and biases – The continuous escalation in East Asia is worrying to say the least. We have increasingly stronger signals pointing towards the possibility of war, including considering Japan’s challenging domestic situation. Windows of opportunities to de-escalate are most likely to open too in the near future and should be actively monitored and used. Another factor may make the situation all the more dangerous: could it possible that, actually, only very few people, deep down, truly believe in the possibility of a major war, as a reader, Alexandros Liakopoulos of BrightSideVeritas, pointed out in a discussion? Peace is one of the crucial norms underlying the current international order. War can be imagined as happening only to a few countries in unstable regions, always relatively far away from home, with indeed destabilizing impacts but controllable ones. At worse, as underlined in the NIC Global Trends 2030, war can be thought as spilling over to regions, but, again, in a contained way. What if this was not the case? What if war was as uncontrollable as ever? What if major wars were still possible? Are the moves of the main actors of the East China Sea drama done while considering the others can really go to war or while estimating, on the contrary, they would never go that far, whatever the rhetoric used? Those are crucial questions analysts and policy-makers need to ask themselves.
There is much more in this edition from the hope generated by space resources, to some very interesting articles that should contribute to improve our understanding of political phenomena to – sobering – news putting the announce of Geneva II in perspective (Syria), and more. 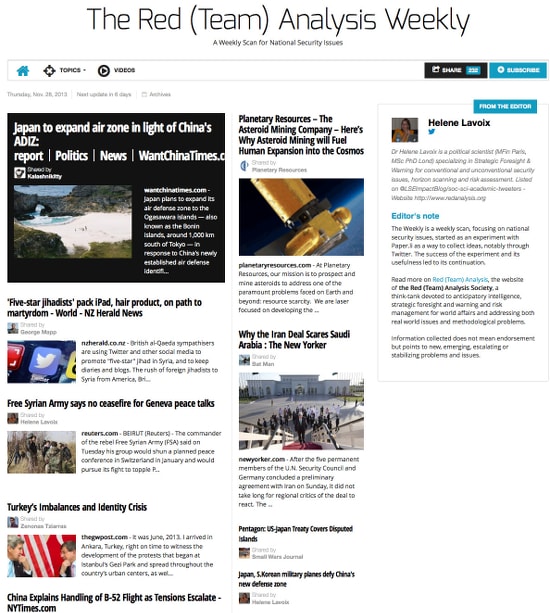